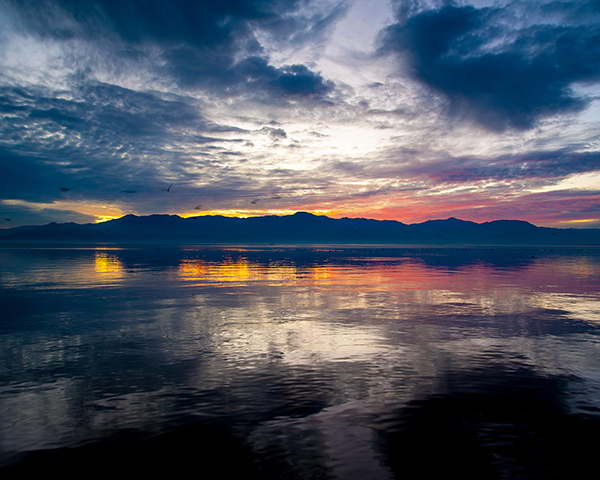 The Salton Sea, California’s largest inland water body was created between 1905-07, as Colorado River floodwaters collapsed Imperial Valley irrigation facilities and overflowed for 18 months creating the New and Alamo Rivers and flooded an area known previously as the Salton Sink. Historically, the Salton Sink is an area of the Colorado River Delta that would periodically flood as the Colorado River shifted course, creating ancient Lake Cahuilla. The Salton Sink lies in a unique geologic and tectonic area known as the Salton Trough, home to the southern origin of the San Andreas Fault. The area’s elevation of 230 ft. below sea level is the 2nd lowest in the United States, surpassed only by Death Valley.

Although located in the harsh Sonoran Desert, former lake bed sediments made agriculture possible given a reliable water source. Early on scientists predicted the desert's intense heat would completely evaporate the sea in 8 to 14 years. However, agricultural drainage of more than one million acre-feet a year – mostly from Imperial County farms, and to a lesser extent from the Coachella and Mexicali valleys – have sustained the Salton Sea for decades. The sea, 34 miles long and between 9 and 10 miles wide, was designated an irrigation drainage repository in 1928. The unique climatic conditions of the Salton Sea region offer an extended growing season making the area prime for agricultural production.

In the decades that followed the Salton Sea creation it became a popular recreation area, well stocked with marine fishes and among the most visited tourist attractions in California. It has become a crucial stop for migratory birds seeking food along the Pacific Flyway, and is known to support over 400 species of birds and various macroinvertebrates. At approximately 162,000 acres, and a relatively shallow maximum depth of 20 feet, the Salton Sea is recognized for its vast open space and outdoor opportunities. The Salton Sea is home to the Salton Sea Recreation area, as well as the Salton Sea Wildlife Refuge.

Concerns about the sea’s future began to surface in the 1960s as a variety of factors contributed to significant drops in its popularity as a recreation destination. Regional urbanization in recent decades has reduced the amount of agricultural drainage to the sea, resulting in a receding of its shoreline. The use of Colorado River water by the municipalities and growing population centers of Southern California has affected water available to agriculture in the area, and reduced the agricultural return flows in the sea. The decreased elevation of the lake has exposed former lakebed areas known as playa, and can be a serious risk to human and wildlife health due their contributions of wind-born particulate matter.

As a terminal waterbody, the Salton Sea has no outlet to remove accumulated salts and nutrients, and since its formation the water has become increasingly saline. As a result, portions of the sea are twice as saline as  typical ocean water, and the shoreline is continually receding. The lake is also high in nutrients as a result of ongoing agricultural runoff, and is prone to periodic algal blooms. Although the lake still meets the water quality requirements set for by the State of California Regional Water Quality Control Board for specific beneficial uses, significant concern for maintaining water quality dependent ecosystems and addressing health issues has been a topic of discussion for decades.