On May 24, 2022, the State Water Resources Control Board adopted an emergency regulation that became effective June 10, 2022, which impacts domestic water users in the Coachella Valley Water District (CVWD) service area. The emergency regulation requires CVWD to implement all demand reduction actions under Stage 2 of CVWD’s Water Shortage Contingency Plan (WSCP); and prohibits the use of potable water for the irrigation of non-functional turf at commercial, industrial, and institutional (CII) sites, including within HOAs. In response to the emergency regulation, CVWD adopted Resolution 2022-27 on June 14, 2022. 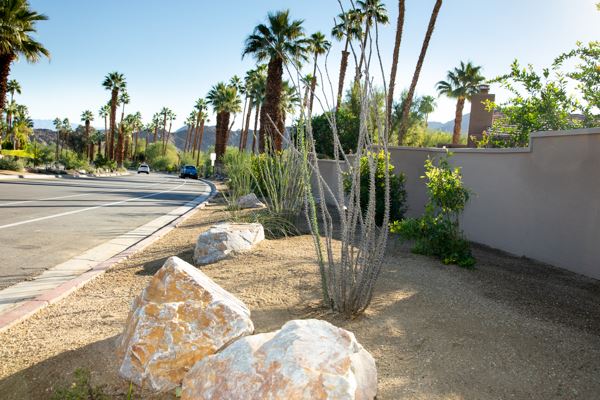 “[C]ommercial water users, industrial water users, and institutional water users as respectively defined in Water Code, section 10608.12, subdivisions (e), (i), and (j), and includes homeowner’s associations, common interest developments, community service organizations, and other similar entities but does not include the residences of these entities’ members or separate interests.”

5. If the prohibition only applies to potable water, what is potable water?
The prohibition only applies to CVWD customers that receive potable water through the domestic water system. Therefore, non-functional turf irrigated by private wells, recycled water, or canal water are not impacted by the State’s emergency regulation, or CVWD Resolution 2022-27. However, all customers, regardless of water source, are encouraged to conserve 15% based on their 2020 consumption.

6. Are there exceptions to the non-functional turf irrigation prohibition?
Yes, the prohibition does not apply to residential lawns, or any turf regularly used for human recreational purposes, such as community spaces, or sports fields and other turf spaces used for recreation or events. Also, the regulation does not ban the irrigation of trees or other non-turf plantings.

Additionally, turf may be exempt from the prohibition if the owner or manager demonstrates to CVWD that the turf meets two requirements established by the state, that 1) the turf species has a plant factor of 0.3 or less; and 2) the turf is irrigated in a way that uses low levels of water (less than 40% of reference evapotranspiration).

7. May I continue to water trees and other non-turf plantings planted among non-functional turf?
Yes, the emergency regulation allows for the continued irrigation of trees and non-turf plantings even if non-functional turf, such as turf under trees, will receive water. While permitted, CVWD encourages all customers to review irrigation systems and install systems that are efficient and comply with CVWD’s Ordinance 1302.5 Landscape and Irrigation System Design Criteria. Customers may be eligible for rebates to offset a portion of the cost to upgrade irrigation systems.

8. How long is the prohibition in effect?
The emergency regulation is in effect as of June 10, 2022, and will remain in effect for one year, unless the State Water Resources Board modifies it, readopts it, or ends it before then.

9. Does the prohibition apply to HOAs?
Yes, but only to non-functional turf on property that the HOA owns, not residences. An individual homeowner’s property is considered residential, whereas property owned and maintained by an HOA is considered the same as landscapes owned and maintained by CII. Therefore, the prohibition does not prevent homeowners from irrigating turf; it prohibits the irrigation of non-functional turf (with potable water) on property the HOA owns. However, the prohibition does not apply to turf that is regularly used for recreation and community activities.

10. Who decides if turf owned by the HOA is functional?
An HOA should review areas of turf that it maintains, consult with residents, and determine whether the turf is functional or not. CVWD may defer to the HOA’s determinations; however, CVWD retains the authority to enforce the irrigation ban if there is a documented violation. HOAs are encouraged to contact CVWD to request assistance with a site assessment.

13. Who will enforce the prohibition of irrigating non-functional turf?
CVWD will communicate the prohibition to affected customers. The state emergency regulation makes violations of the prohibition an infraction, which CVWD is authorized to enforce. In addition, anyone may report water waste, including irrigation of non-functional turf on a commercial, industrial, or institutional property to the State Water Resources Control Board at SaveWater.CA.gov. The SWRCB may use its enforcement authority to respond to violations of the emergency regulation.