Heavier Coachella soils are the only soils that may be subject to runoff at typical landscape sprinkler application rates (0.5"-2.0"/hr). This problem is more severe on compacted and sloping areas. Management of this problem is particularly important during the initial seeding and subsequent overseeding because the runoff will carry the grass seed away. The best response to sprinkler irrigation runoff is to break up the sprinkler runtime when irrigating areas exhibiting slow permeability rates. 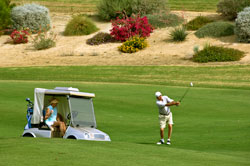