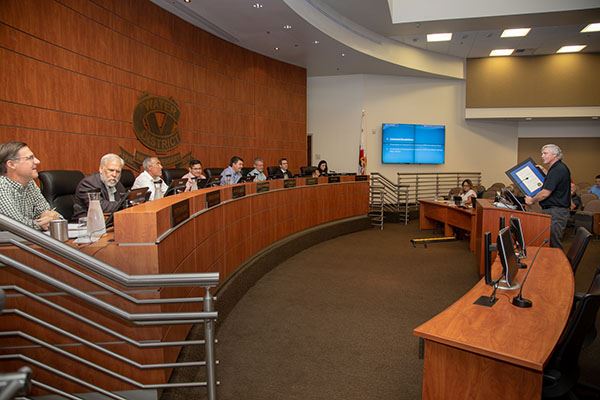 Coachella Valley Water District (CVWD) is a special district established by the state legislature and certified (PDF) by state officials on January 16, 1918. CVWD is governed by a 5-member Board of Directors, each of whom is elected to 4-year terms by District voters, as required by the Riverside County Registrar of Voters. Each director lives in and represents 1 of 5 divisions in the District, and is elected by voters who also reside in that division.

The Board of Directors sets policy and represents the ratepayers. The Board of Directors generally meets the 2nd and 4th Tuesday of each month at 8 a.m. at District offices. The public is encouraged to attend these meetings to learn more about the Water District. The 1st meeting of the month typically is held at the Palm Desert office, and the 2nd meeting of the month typically is held at the Coachella office. Exceptions to this schedule do occur. Meeting agendas are posted online 3 business days prior to a meeting and include the time and location. Anyone can subscribe to an email distribution of upcoming board agendas.

District policies are regulated by several state and federal agencies, including the State Water Resources Control Board, California Department of Public Health and the California and United States Environmental Protection Agencies. Because the District is a government agency and not a private company, it is not regulated by the Public Utilities Commission.